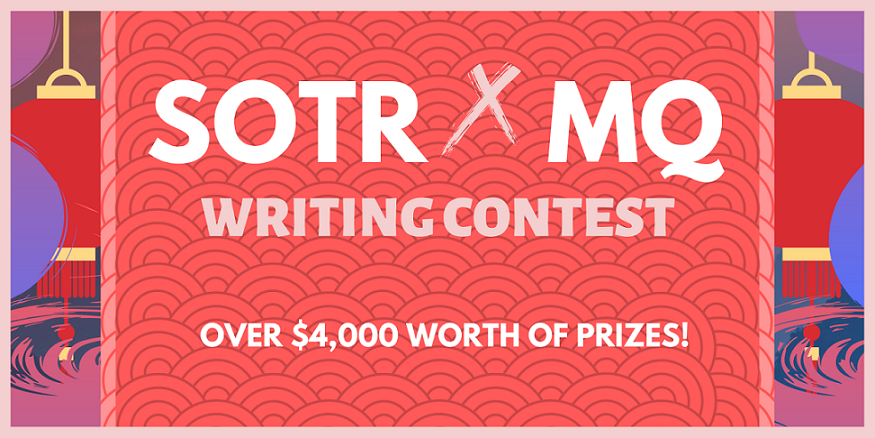 Hey everyone - Moon here. Sorry the winners announcement is so late!

On behalf of etvolare and the rest of the Sovereign SOTR translation team, as well as Pegaz, author of the ‘The Idle System’ series, available on Amazon! sponsor of the contest, and everyone working here at MoonQuill, I’d like to thank everyone who participated in the writing contest!

It was an awesome experience reading through the various short stories and poems, and I personally definitely laughed more than a few times.

So, thanks for participating!

That being said, a few individuals marred the contest for the rest of us - during the contest, particularly towards the last few days of voting, we at MoonQuill detected horrendous levels of cheating. I don’t want to get into it too much up here, but I’ll write a little blurb at the bottom of the page on how we detected and dealt with the cheating.

I think some awesome entries won the day and I’m very happy to announce the results!

A Variation of Jiang Chen

A Path Through the Wilderness

The Dao of Harem

From a Character Forever Forgotten

Congratulations to all the winners

We’ll be keeping the contest’s browse page on the website, so if you ever want to revisit the contest submissions and read a few, they’ll be there.

We can’t go too much into detail, or contest cheaters will be able to use the information to “cheat better” in the future, but basically we saw a great deal of suspect data heading into the latter days of the contest. We dug deeper, and found that there was rampant cheating going on where a few users were either employing a click farm or bots to create endless accounts and use them to vote for their (and some other) submissions.

After the contest ended, we spent hours parsing through user accounts and deleting ones that we could confirm were definitely “fake” accounts, along with their contest votes. We did this very methodically, starting with deleting a few hundred, then a thousand, etc.

So now, we have contest results, parsed so that most of the fake votes should have been removed. However, there’s a fairly large margin of error despite our best efforts, as we didn’t want to accidentally delete a real user’s account by accident. So, it’s still likely that there are more than a few bot/cheater votes.

But, we didn’t want to simply disqualify anyone who had illegitimate votes on their submissions - after all, the cheaters could have voted on some other works to “spread the blame”, as it were. On the other hand, we wanted the community vote to still matter for the contest, despite the marred data.

So we came up with a compromise. We’d keep the votes that remained after our parsing, and we’d add in more staff/sponsor input. Originally, we’d planned to be very hands-off with staff voting, only reserving one “winning” spot for staff votes.

But now, the staff vote will be worth roughly 30% of the vote for all submissions, then 100% for the one that was previously going to be determined through staff vote anyway. Each voting staff member (of 5), were told to make a ranked list of their five favorite works. Each staff member’s first place vote received X amount of votes, and then 2nd place received a bit less, etc.

This way, those with the most remaining community votes still had the highest chance to win, but the staff would ensure that the “best” works would have their chance to shine past the controversy and illegitimate votes that remained. Rest assured - all staff votes were carried out anonymously. No staff, not even I, were told who wrote what submissions.

We realize that it’s very unfortunate that this needed to happen, and it’s really probably just one or two people who ruined the contest’s parameters for everyone else.

We at MoonQuill will be doing our best to make sure that nothing like this can possibly happen in the future, and we will be upping our registration requirements, cheating detection capabilities, and coming up with standardized ways to deal with cheating in contests in the future. We want to hold more writing contests in the future - it’s a great way to reward high skilled, creative writers, and we really want to spread the joy of writing and reading to as many people as we can.

So we’ll definitely hold more contests in the future. But it’ll probably have to wait a bit until we’re confident that we have a system that can’t be easily exploited.